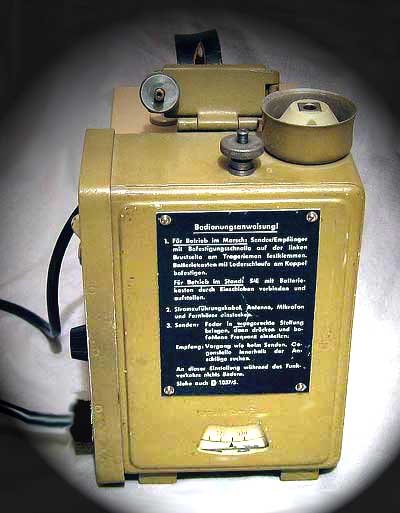 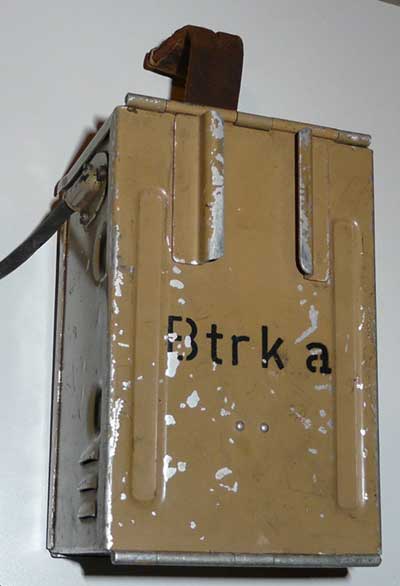 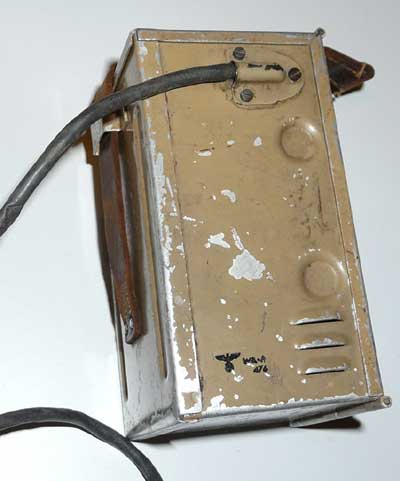 The KleinFunkSprecher d "Dorette"  was the smallest radio unit made by the German in the WWII. It was made in a time when the war was going to a end. October 1944,  it seeing the daylight, and the warfield. It is a wondering how they did it, the most of the factories was bombed and trasched. Inside the unit, you clearly could see the loss of the quality and the components used. Now, I was lucky to get a KlFuSpr d from a friend in Germany. It has been underground  for 60 years, and it was not possible to open it. The T/R switch knob was gone. The corrosion on the outer side was heavy. After using meny metodes, I was lucky to open it without disturbing it. The pictures I took speaks more than words.  The battery box was not there. I make a new one later, possible with a small vibrator power 2,4v to 150vdc. All resistors and condensers was gone.The same the two RL1P2 and DDD25 tubes.The filaments was ok, but air was leaking into it. The yellow paint on it, was caming on later,and this sealed for more outer corrosion.

Now, all parts was demounted and the first step was to repair the main chassis. To get out the "tune" wheel axel, I need a pressure at 1200kg. I make a special tools on the backside of the chassis to hold the pressure of the axel. BANG, it turn out. I want to rebuilt the unit, but then using RL2,4P2. It is more functional using a 2,4v chargable battery to the filaments. It is some differents on the 2 drawings. It is on the "negative" voltage parts. The main ground for the negative voltage on chema 1,going to the middle of the Mic connector. This cheme seems to be the original, and I think this is faulty. Another "original" show the center of mic-connector going to ground. (Anybody with the correct cheme?) 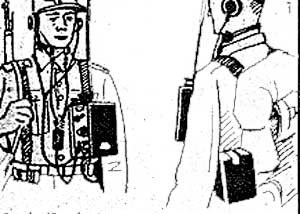 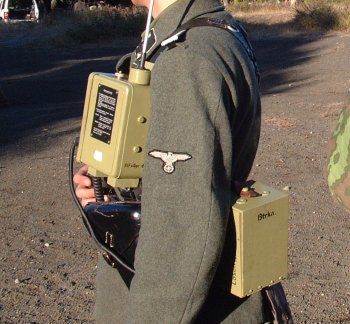 Battery connector KLFuSpr.d which I made of POM for later testing the radio. Remounting the new parts beginning.

Now, the time coming for connect power to the radio.I have changed the filament to 2,4v and the tubes to RL2,4P2. The DDD25 have a 12 ohm 3w resistor in series with the filament. The HT 145v dc. NOW...nothing, ,just a click. I have forget a HTvoltage wire to the amplifier tube. Voila,Now a medium hiss/noise was heard in the earphone. The transmitter work at once ca 24ma/145v and modulated ca 78% with the original Wehrmacht mic "Feind hort mit". After some adjustments in the oscillator the transmitter giving over ca 52ohm on antenna ca 285mw. The receiver have ca 1uv 8db noise reduction, very good for this type of receivers. Next was making the new scale. After using a program for making radio scales,it was only making the silkscreen and then print it on. Not bad for the radio to play again after all this years under the turf.  It is complet rebuild with most of the part as original condenser etc.etc from that time. Some new resistors from the 70`s. I testet the KlFuSpr.d with changing HT voltage. Normally 145vdc, the transmitter giving 285mw and the receiver noise moderate level, and a signal 1uv 80% modulated. When lowering the voltage to 125v the output fall down to ca 205mw and no fall in the signal or noise in the phone.Next lowering to 90v the output was ca 150mw and a 2 db fall in the receiver noise. Still hearing the signal 1uv. Not bad at all. The German do a nice job with this little "Funkgarete". So overall, the KlFuSpr working well in the field with the HT battery falling from 145v to 90volt. The filament voltage was testet between 2,1v to 2,6v without any disfunctions of the unit.

Now, I am beginning with constructions of the battery box. It will have the possibility to have 4x 10Ah 1,2v D cells filament battery, and a small 2,4v transistor oscillator  power producing the highvoltage needed. This have the same storage as the original 150v battery.150v receive need ca 2-3ma, and transmitter ca 20-25ma.Same time using the original batteries 1,2/1,5v and 150v HT if it is wanted to change back. Tha radio inside have possibility to chunting the 12ohm resistor regulating the filament to DDD25 from 2,4v to 1,25v.

Battery box project, KlFuSpr d.  Constructions of the tools for the box.

Finished the project with the box.(Prototype). Next making the battery pack 150v and 2,4v (1,4v). The highvoltage pack ,I making it from 16 Duracells 680Ma. Moving away the topp of the batteries make them smaller and easy to press together into a 2mm paper carton.

The testing of Dorette

Using a Feldfu f together with Dorette. Freq 32.0Mhz. The radioes standing 1m over ground.Feldfu f with 120cm original blade antenna, and Dorette 160cm original "clumpsy and heavy" antenna. In nearly flatt terrain communications ca 2,4km. Changing the Dorette antenna to 120cm ca 2,3km. A little shorter. Dorette with a little antenna "Coil" on the base of 120cm antenna reach the distance between the units to 2,8km. Anyway non of the antennas itself have the right 1/4y lenght.(2,28m for the frequency). End test Dorette with a 2,28 1/4y antenna the distance reach 3,2km. Not bad for this type of receivers, ans small Tx power. Later in the summer I will test more between 2 Dorettes mounted on the body and live in the woods and hilly terrain.