This is a American manpack UHF-radio (ultrashort wave) with name AN/PRC-10a constructed for phone F3 (FM) mod.After a happy production in USA with SCR-300/BC-1000 they started in beginning of 1950┤s constructing a new radio,that was smaller and lighter.On this time this was possible with the new micro-valves.The result ended with PRC-10 (included PRC-8/9).This radiostations was the first constructetd with modules.Modules make it faster to change components, and service.Some years later they make PRC-10A.This was license.produced in Sweden and get the name RA-105. RA-105 was somtimes stationary monted in cars.Power came from the cars battery 12/24v through a converter.

I have worked with this set in the field together with Russian R-105D and R-105M,and the frequence stability  on Ra-105 (PRC-10a) is a looong way from the russian units stability.Russian and German Wehrmacht are built on the same chassis alloy constructions,giving perfect stability for self-oscillating oscillators.Ra-105 is made of alluminium plates giving vibrations and unstability,yes,but it works.

The AN/PRC-10 came into the Army inventory in March, 1951. It is a 16 tube FM radio which was used as a squad radio. It is part of a family of radios AN/PRC-8, AN/PRC-9, and AN/PRC-10 which differ only in the frequency of operation and the components that determine that frequency.

Each radio set consists of a superheterodyne FM receiver and FM transmitter use a common antenna. The Receiver-Transmitter consists of a single panel chassis assembly mounted in a magnesium case with a watertight seal. A short eight wire cable connects the chassis to the BA-279/U battery while two springs clamps hold the R-T case to the battery case. The PRC-8,9,10 radios can be adapted for vehicluar use by means of the AM-598/U Amplifier Power Supply that converts 24 volts to the operating voltages of the radio (the battery cable plugs into the power supply), plus can drive an audio aux speaker.

The AT-271/PRC antenna (the long antenna) is used with the radio for maximum range. It is provided in seven sections connected by an internal stainless steel cable, a total of 10 feet long. When folded, the cable keeps the sections together as a group. This antenna screws into the LONG ANT jack on the top control panel. The AT-272/PRC antenna (the short antenna) consists of several lengths of flexible steel tape riveted together, making a tapered antenna 3 feet long that screws into the SHORT ANT jack. The short antenna is for general service and can be folded into the carrying bag that is part of the PRC-10 equipment list.

In the field, soldiers quickly found that the backpack antenna was a sniper target. The antenna was therefore removed, or sometimes the radio was carrid upside down with the short antenna pointed to the ground, which did not seem to effect the range of 3 to 12 miles, depending on antenna used and siting conditions.

The handset H-33B/PT connects through a cable and ten contact plug that connects to the AUDIO jack on the control panel.

Constructing a converter for 12vdc and automatic charger for gel battery packs (here 2 x 6v in serial each 7.2 Ah

Original power made in Sweden for the Army (SRA)

The radio RA-105 (PRC-10) going on air. All the voltages to the radio as spec. As a problem with charging correct the Gel Battrys ,we constructed a charger  for this type. This controll all the charging and after charging.The components came from the Web page ELFA

I constructing a new power modul for PRC-10 (RA-105).The unit take place into the old battery box.Two 6v-7.2Ah chargable battery pack included, make all the voltages needed for operations.This making it possible to operate the radios we have.The orginal pattery pack with dry cells is not more possible to get.As the radios working on amateur 6m band (50-52Mhz) it is interesting to have them to work again.The project is now finished.The converter functions as it should,and the RA-105 going on air.

- By at least 1947 wood "concept" mock-ups of this new generation of radios had been constructed that would almost duplicate the final product. By at least 1950 functioning prototypes had been completed and possibly even an initial order for production radio sets. By 1951 production radios began to filter into the field, and by 1953, the PRC-10 family of radios(including the PRC-8 & PRC-9) had become familiar equipment. They would accomplish all those goals that had been established for the replacement of the SCR-300, and even include some additional "First" in the area of front line tactical communications equipment. These "first" included modular construction which allowed for almost instant repair-ability in the field by personnel with a minimum of training and support equipment. Secondly was the use of the now familiar short "Tape" antenna which has yet to see a viable substitute design after 50 years(prototype PRC-10's used a sectional antenna similar to the BC-1000 which was a British.design). The only thing to remain of the old SCR-300 was it's multi section, collapsible, long "whip" antenna, but now supplied with a rubber coated spring base to prevent damage while in use(another innovation left over from WW-II that is still in use today).

36. Correction of Defect in Socket of Battery BA-279/U

Reports have indicated operational failure because of intermittent or poor contact betweenü@battery plug P1
and the socket of Battery BA-279/U.

Investigation discloses that the following factors are primarily responsible for such difficulties.

( 1) The jacket socket opening is too small to allow the
battery plug to be seated properly in the socket.

(2) The battery socket has sufficient give under pressure to prevent
proper matingü@because of inadequate support in the socket well.

b. Corrective Action in Production.

These difficulties have been corrected in production on contracts awarded after 21 December 1951 by increasing the diamet r of the jacket socket opening from 1/4 inches to 3/3 inches and by providing improved support in the battery socket well.

c. Corrective Action in Field.
Application of either of the following measures will insure proper mating between the plug and the connector, whether or not the battery socket is supported adequately in the socket well:

(1) With a knife orü@other suitable instrument, cut the top of the battery jacket, at the socket end, free from the sides for a depth of 2 inches to permit that portion of the jacket to be folded back from the socket.

An undetermined quantity of tubes type 1AD4, manufactured by Ratheon, have a useful life of as little as 10 hours when used as the receiver oscillator (V8) in Radio Sets AN/PRC 8 and AN/PRC-10.

Failure of this tube is evidenced by oscillation, interrupted at a low repetition rate resembling motor-boating.

This type of failure will not be indicated on a tube tester.

Present available information indicates that this phenomenon is the result of grid contamination occasioned by an improper aging processing during manufacture.

b. Replacement.
If oscillation of this type occurs, remove the original tube and replace it with a new tube (Sig C stock No. 2J1AD4).

When replacing this tube, be sure that the red dot on the tube corresponds to the pimple on the socket. 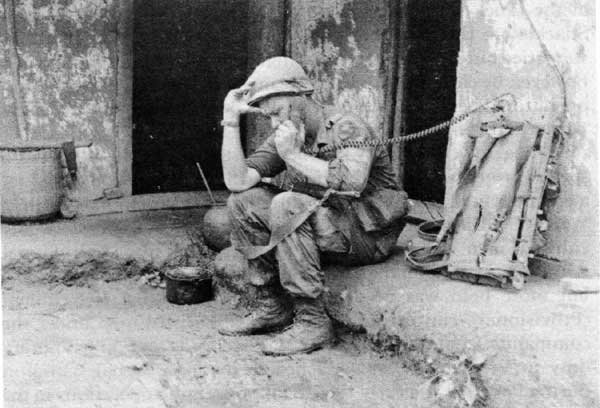 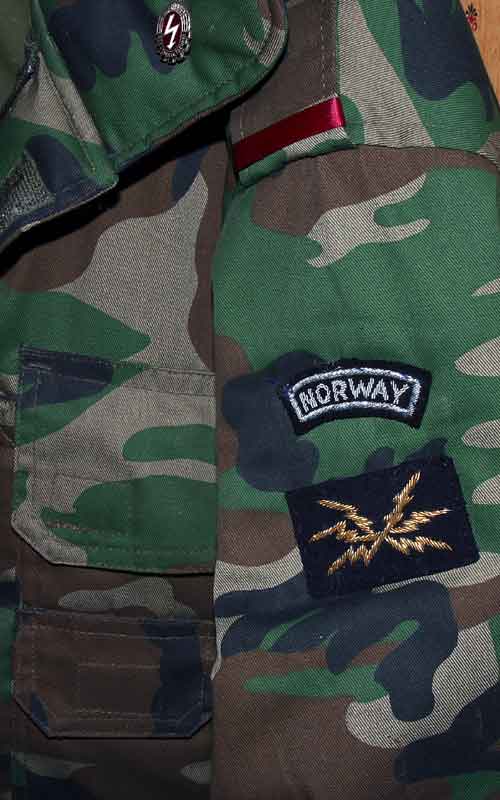 12/6v inverter
This unit is working with a dry-battery. It is possible to get a 12/24vdc power for mobiluse. To-day it is not possible to bay this batterypack, so I work a little with this 12v inverter. I put it in the empty battery box a 12v 8 amp battery with modefied connector to charger through the box downstears.Over the battery a isolating cover, and the inverter upstears. Voila,on air.